Labrador is now back in stock globally!
Sorry about the disruption.

10% discount when you purchase 2 or more units!

The application itself is easy to use and well designed, especially if you’re not used an oscilloscope or made electronic measurements before.

Why stick to a few lab boards when you could have five, all of which come packed onto a single board with a small footprint?

Factor in the size, portability, ease of use and price, well let’s just say that I think this board will be pretty popular.

Now there’s no reason to NOT have an oscilloscope, a function generator, and other very useful tools at your fingertips.

Labrador is an all-in-one tool for electronics students, makers and hobbyists. Just plug your Labrador board into a PC (Windows/Mac/Linux), Raspberry Pi or Android device via a MicroUSB cable, load up the software and you instantly have the following engineering tools at your disposal:

Oh, and did I mention that both hardware and software are 100% open-source?

The development of Labrador took more than 2.5 years to complete, and most of this effort was put towards the software interface. Everything was been designed from the ground up to be simple to use for beginners, while retaining features that more experienced engineers could take use of. There’s a fully featured 2-channel DAQ mode with variable sample rate, CSV export, signal averaging and offline playback, but it’s placed up in the menus rather than the main screen. Design decisions like this make Labrador suitable for makers and engineers of all skill levels. The oscilloscope, especially, was redesigned from first principles to take advantage of the host PC’s immense processing power and memory. Every sample captured by the board’s ADC is sent over USB and buffered by the PC software, allowing you to view minute-long streams at a 60Hz refresh rate without a single gap in the waveform. The controls were designed with keyboard and mouse (or trackpad) in mind. Note the lack of virtual knobs and dials in the screenshot below. All of this makes designing and debugging your circuits easier than ever – yes, even compared to products from the likes of Tektronix and NI. The Desktop software interface can be downloaded from GitHub Releases. The Android software can be downloaded from Google Play. 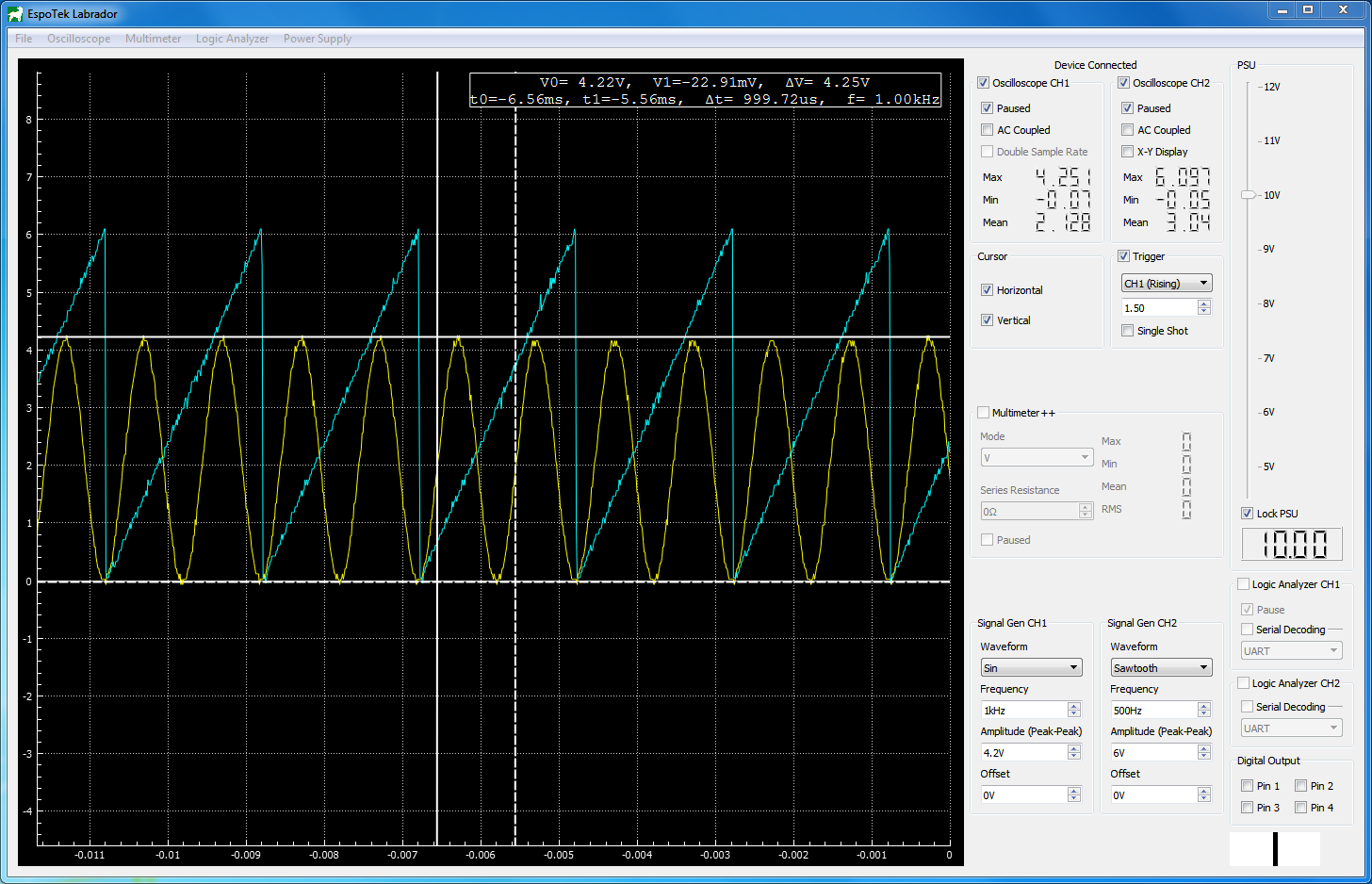 Above is an example of what the software interface looks like. Here, the signal generators are generating two different waveforms (sine and sawtooth), while the oscilloscope displays the two waveforms and the horizontal and vertical cursors measure the sine wave. Of course, if you’re a beginner, you don’t need to be doing all of that at the same time!

Labrador users have access to the best support possible: a direct email link to the product developer. If you have any issues or suggestions, email [email protected] and I’ll do what I can to help; be it getting the software running on an unsupported OS, adding in a feature you’d like or just getting your board up and running. In addition to this, community support and discussion is available at the GitHub Issues Page. Full documentation (including pinout and a tutorial for beginners) for the hardware and software is available at the GitHub Wiki Page.

¹ – 12-bit sampling is available at 375ksps, single-channel only. ² – This figure is an approximate “maximum detectable frequency” dictated by the sample rate. ³ – This figure is for source current. Current is sunk partially into the opamp driving the signal gen and partially into a 1k resistor. Thus, maximum sink current can be calculated by dividing the output voltage by 1k and adding 50µA. This configuration was chosen so that capacitive loads could be driven without significant nonlinearities. In simpler terms, this means that if you’re trying to drive current into the waveform generator through use of an external current source, then the maximum current that the waveform generator can handle is reduced. (This is not something that would be an issue for most people.) ⁴ – The Power Supply is controlled by a closed-loop feedback loop that ensures the DC voltage across output remains constant. Thus, it has nonlinear elements, but can still be approximated by a Thévenin circuit with Vth = Vo and Rth = 0. ⁵ – Multimeter ranges vary with reference resistor used.

8 reviews for EspoTek Labrador Board